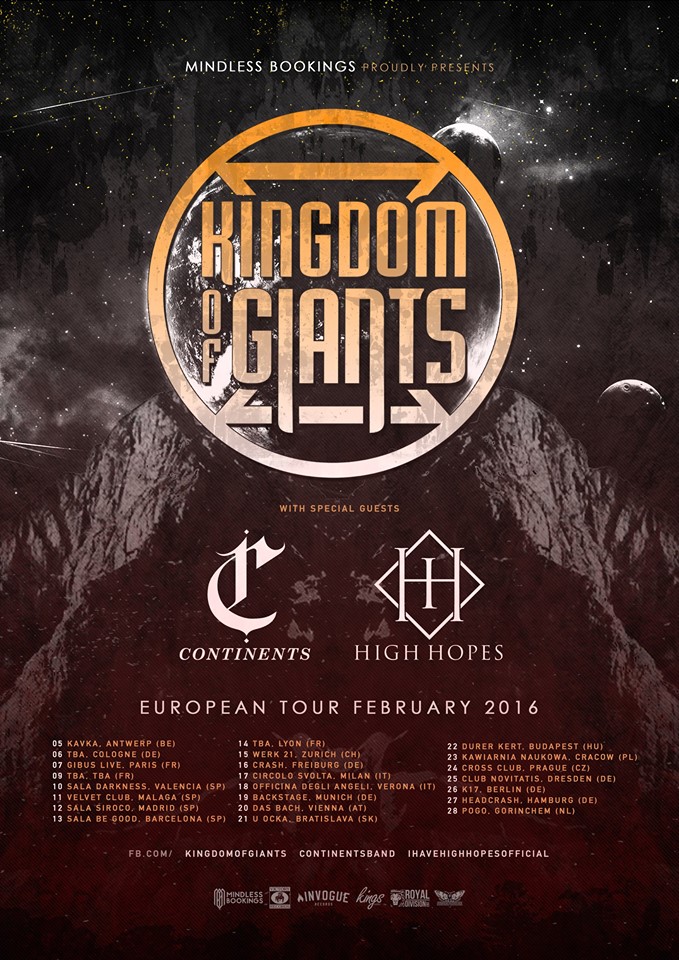 Kingdom of Giants is a 6 piece Metalcore band from Northern CA. Established in 2011, they have relentlessly been touring in The USA, Canada, and Europe, with bands such as Volumes, Fit For A King, Phinehas, and I, The Breather. Their first major album, "Ground Culture" was produced by Andreas Magnusson (Haste The Day, The Black Dahlia Murder, Fit For A King) and released after signing to InVogue Records in the fall of 2014.

In a genre / age where recording quality is at an all time best, Kingdom Of Giants excel in translating this quality to a high energy, organic, live experience. The band is composed of Dana Willax (Vocalist), Max Bremer (Guitarist), Red Martin (Guitarist), Julian Perez (Guitarist), Levi Norris (Bassist), and Truman Berlin (Drummer).

The band does a great job of keeping their albums interesting from start to finish. Each song sounds much different than the previous, but they are able to capture one overall feeling of cohesiveness throughout. Songs like the title track, "Ground Culture" or "Endure" seem to portray what the band is all about, while others like, "Sky Burial" and "Virtue" show just how dynamic their sound really is.

"It would indeed be a shame for the group to fade into the sea of mediocre crap that other bands are more than content to thrive in, because it's blatantly obvious that Kingdom Of Giants refuse to be ignored and will be heard. This resilience literally dripped off their last full length and was pervasive and infective, a pure "soundtrack to a revolution."" -Sputnik Music


"If you listen to the lyrical content of each track, you can easily spot a continuous theme throughout the record. The lyrics tackle questioning religious faith, understanding our own mortality, and dealing with the loss of family members. I think these themes are easily relatable, especially for our generation, which is one of the least religious generations ever. The desire to achieve more in life is something we can all understand" -Under The Gun Reviews
KINGDOM OF GIANTS SHIELDS HIGH HOPES