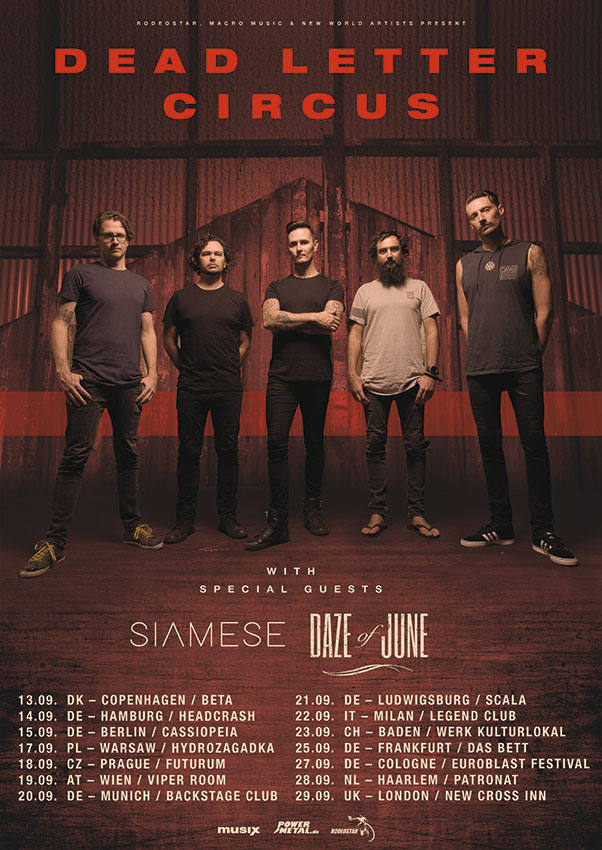 If the personal really is political, then Dead Letter Circus’s self-titled album – their fourth full-length of all-new original material, but fifth overall – may well be the band’s most political statement to date. For a group that has, on previous records, taken a strong ethical stance on issues such as fracking, Dead Letter Circus strikes at the heart of what makes humans tick, and the insecurities and psychological foibles that can make us all so fragile.
“When it comes to my lyrics I’ve generally always presented the evolved version of myself that has learned the lesson the song was written about,” offers frontman Kim Benzie of the LP’s overarching lyrical themes. “I guess this album kind of completes the picture by revealing the mental state those lessons often begin from. I never intentionally set out to write with a message in mind, I just let it happen, and this one came out super raw and personal.
“Some events in the past couple of years really opened my eyes to the danger of keeping your fragilities hidden, particularly for males,” he adds. “We don’t exist in a society that supports unconditional happiness, and if you don’t fit what is offered, the isolation and guilt can lay deep roots. I was very lucky to stumble into music, which became my personal ladder to climb out of the darkness. As we wrote our way through the album I noticed the recurring theme spilling from song to song acknowledging the wide spread mental health problem and shouting that there is hope.”
Key to communicating this message was Benzie’s decision to take a more literal approach to his lyrics than in the past, when he was more likely to dress them in metaphor. Case in point is the chorus of ‘We Own The Light’, a song that summons strength from a position of mental vulnerability:
“Don’t let the sun pass you by,
Don’t accept defeat,
Don’t let the world be the reason”
Just as Dead Letter Circus looks for light in the darkest of places, musically it’s something of a retort to 2017’s The Endless Mile, in which the Brisbane five-piece reimagined songs from their career in an acoustic and strings-laden setting. By the time that process was wrapping up, the band were ready to harness the power of their amps again.
“It felt like a slingshot almost, of just needing to rock out,” smiles Benzie, who co-founded the band in 2004, and is joined by guitarists Clint Vincent and Luke Palmer, bassist Stewart Hill and drummer Luke Williams. “The Endless Mile was fun and challenging, and it was really nice to sing in that setting, but violins and pianos can get a bit fatiguing after a while. ‘The Armour You Own’ [the album’s first single, inspired by a conversation Benzie had with his son about anxiety] was almost cathartic after doing that. It’s so beefy.”
It was while adding the final harmonies to The Endless Mile that Benzie started sketching out ideas for what would become Dead Letter Circus, unexpectedly finding himself in a month-long purple patch of creativity that delivered two or three song ideas a night. Replicating the songwriting process of 2015’s Aesthesis, rather than fully develop his ideas the singer took them to his bandmates to flesh out.
“The band just come alive in that freeform jam situation, with just the one little seed of a starting point,” enthuses Benzie. “I had this epiphany while watching the guys get excited and bounce off each other that I am the only person in the world who gets to see them spiralling out and doing this, and what a privilege it is to witness musicians of that calibre up close. It came to me that I am possibly the biggest DLC fan in the world.”
For Luke Williams, the ease with which Dead Letter Circus came together is a reflection of the fact that this is the first time in the band’s career they’ve had the same line-up for two consecutive albums. “That just streamlines the process, that democratic process that we’ve got down now,” he offers. “We’re a bunch of good friends and we know how to talk and communicate.”
Dead Letter Circus also repeats the winning production combination of Forrester Savell (Karnivool) and Matt Bartlem (Jarryd James, Matt Corby), the team that helmed Aesthesis, which debuted at Number Two on the ARIA charts (a feat also achieved by 2013’s The Catalyst Fire). The band worked with the duo over a six-week period at Studio Circuit in the Gold Coast, arriving at the most organic album of their career, light on digital programming but riddled with giant hooks (‘The Real You’, ‘Change’) and the quintet’s trademark combination of ethereal atmospherics and towering riffs (‘We Own The Light’, ‘Heartline’). ‘Say It Won’t Be Long’, meanwhile, mirrors its lyrical themes with one of the band’s most frenzied performances to date, as Benzie sings about “anxiety and the frantic feeling you can get when you start joining the dots on things and screaming, someone help me”.
Dead Letter Circus owes a debt of gratitude to the band’s past, but has its sights set firmly on the future. It’s the sound of a group united in a common cause.
“This album was a huge confirmation of the brotherhood within the band,” agrees Benzie. “It felt like we reached a point of a collective mind state, where we were creating music that was only possible because of the brotherhood within the group. It felt like we’d arrived. A self-titled album felt like the perfect way to mark this moment in our journey to ourselves.” ENDS
FB DEAD LETTER CIRCUS FB SIAMESE FB DAZE OF JUNE